Alila Transforms an Abandoned Sugar Mill into an Architectural Masterpiece

How is it that an old abandoned sugar mill, dislodged from time and resting beside the Li River inChina, has become one of the world's most famous architectural hotel masterpieces in recent years? Not only does the human element of the design make this hotel seem like a backdrop from Westworld, but the vast and surreal landscape solidifies the sensation. Yangshuo is famous for its karst mountains, green hills and winding rivers, which resemble an ancient Chinese painting, referred to as paradise on earth. Alila hotels set off on their ambitious project in 2014 and completion was accomplished in 2017. The resort is advertised as a home away from home for weary travellers, who can explore and begin an exhilarating journey into the region’s natural and cultural splendours. It is also a place where guests can rest under a 1,400-year-old Big Banyan Tree, discover ancient towns frozen in time, and experience ancient quaint traditions. The hotel offers guests a wealth of modern facilities, as well as a variety of engaging activities for a vibrant stay in Yangshuo. Perfect for those seeking a summer or winter escape from the city. 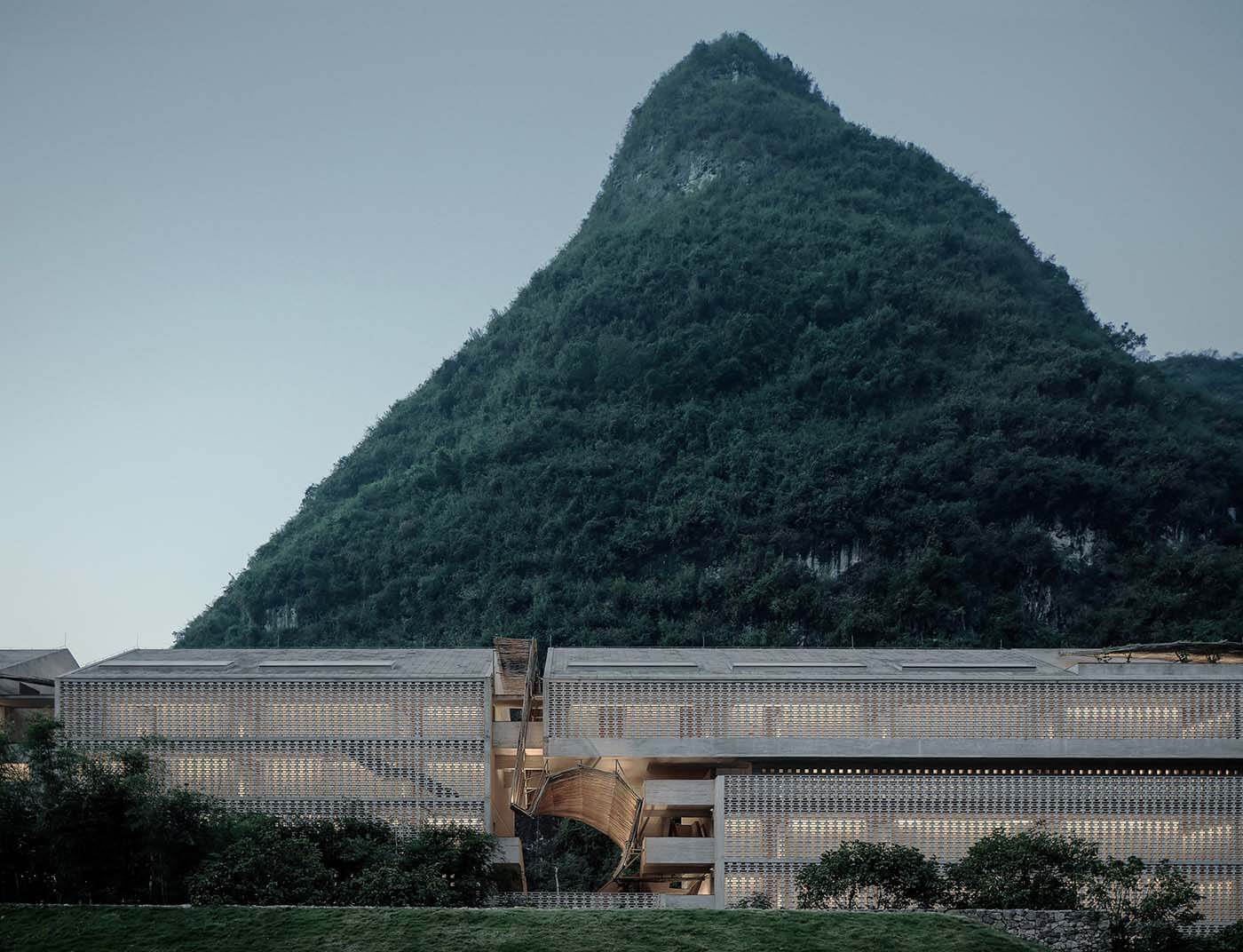 The current owners stumbled upon the project in 1997 when the sugar mill was still in operation. By 2002 all work had ceased in order to preserve the environment and the sugar mill and surrounding areas were left abandoned. A local developer was able to buy the property at auction and had grand plans to tear down the original factory, making way for brand new commercial facilities on the site. Not happy with the fact that the historic buildings were to be destroyed, the current directors of Alila Yangshuo persuaded the previous owners to sell them the property instead, so that they could preserve the architecture of the old sugar mill and make it a living gallery. The project set out to preserve the site’s industrial heritage by combining the old and new, creating a statement in architectural styles. The1960 pre-existing structure and industrial truss are flanked by larger buildings primarily used for guest accommodation. Meanwhile, a sunken plaza and reflecting pool have been re-designed to complement the historic architecture.Rather than replicating the old buildings, material and texture, architects and interior designers sought to use comparable but contemporary materials and construction methods in order to establish continuity. The main building, which harbours the rooms for guests, has been constructed using hollow concrete blocks, thus ensuring that its pre-existing relationship with the mill is preserved. All of the new buildings constructed using the same ethics have been designed to rest as low to the ground as possible, minimising distraction from the panoramic natural views of the Chinese landscapes.

The hotel's simplicity emerges from the origin of the design; indeed, any new buildings constructed have been intentionally crafted to be bare and minimal, so as to allow for prime viewing and to keep the focus on the 1960s sugar mill, preventing the young buildings from becoming an unnecessary distraction. Growing between the various buildings, old and new, a garden has been conceived to allow guests to wander and be present in the moment of standing between natural, old and new. To mature the feeling of presence, and inspired by Yangshuo's karst caves, Alila have created somewhat of a cave of their own, leading to the spiritual hub of Yangshuo. Accessed via a stone-like spiral stairway, within its quiet sanctuary, Spa Alila houses five VIP treatment rooms and combines traditional Balinese wellness customs and techniques with local ingredients in a wealth of rejuvenating treatments.

Award-winning architect DongGong, Founding Partner of Vector Architects and interior designer Ju Bin, Founder and CEO of Horizontal Space Design, and named one of China’s top 20 Interior Designers in 2016, have incorporated innovative ideas to complete the modern retro project that is Alila Yangshuo. As a highly-respected architect, DongGong is frequently consulted to share his philosophy regarding the use of light and space in relation to the natural surroundings of the building. With this in mind, Dong Gong has created Alila Yangshuo as a modern retro resort that blends seamlessly with the stunning landscape of Yangshuo while keeping intact the important heritage of the original sugar mill.

“Alila Yangshuo, as in many of our recent projects, is located in a natural site so I have the opportunity to think of how the environment can impact and influence the architecture and its function,” says Dong Gong. “I believe that an architect should be in awe of what is called ‘Tian’ in Chinese or ‘nature’ in Western culture. This means that when you are on site, you see with your heart and invoke the energy of the site environs to define the form and meaning for your architecture.”

Undoubtedly though, the most stunning spot within the retreat is the original sugarcane loading dock that has been converted into an exterior leisure pool. Hovering over the river and framed by the posts and beams that made up the original structure, the pool deck offers a cinematic setting to relax and take in the spectacular landscaping unfolding imposingly all around you.

The brickwork of the hotel also allude to the sugar blocks which were produced in the mill as well as echo the brick exterior meticulously restored buildings, which now house the public facilities. Other local materials used in the hotel's design include red volcanic rock, discovered during construction and used to make terrazzo floors, wall screed and pottery for the guest rooms, and clay, which was used to make decorative reliefs for the guestroom bathrooms echoing the clay reliefs that local artisans made in the '60s, now adorning the headboards in the guests’ bedrooms.

Stay up to date with our newest collections and enjoy our monthly travel magazine complimentary!
Thank you! Your submission has been received!
Oops! Something went wrong while submitting the form.
CLASSIC PERSPECTIVE
Copyright © 2017–2020 Classicperspective.com™. All rights reserved.
StoriesContact
HomeHotelsVillas
.